Dr Ana Slavec, researcher and consulting statistician at the InnoRenew CoE, was one of five attendees of the Data Steward School, which was held from 5-16 August 2019 at the International Centre for Theoretical Physics in Trieste, Italy.

Directed by Dr Hugh Shanahan, it was the first of the planned CODATA–RDA schools to be held in Europe under the FAIRsFAIR initiative. The four other students selected to participate in the data steward strand were Frans Huigen (Data Archiving and Networked Services), Sanjin Muftic (University of Cape Town), Sothearath Seang (University of Côte d’Azur) and Cristiana Pisoni (University of Bergamo).

For the first week, Data Steward School was held together with the School of Research Data Science for early career researchers, which took place in Trieste for the fourth time. This year, there were 37 participants from 20 countries. 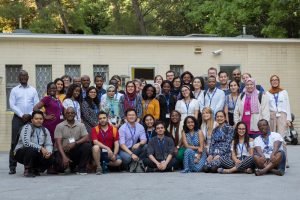 Participants at the end of the first week. Image: Andjani Gatzsweiler

For the second week, the five data stewards had a separate programme where they learned about metadata, persistent identifiers, data discovery, data management plans, repositories, linked data and SPARQL queries. They had only two lectures with the early career researchers, Information Security and Research Computational Infrastructures.

Data Steward School was a valuable learning experience for Dr Slavec. Based on new knowledge, she will be able to better assist other researchers in preparing their data for deposition in repositories. As part of the programme, Dr Slavec developed a data stewardship action plan to implement at the InnoRenew CoE within the next six months.

InnoRenew CoE researchers at the FRISSBE project kick off event

New scientific article from InnoRenew CoE together with researchers from Nagoya University, Oregon State University and University of Georgia