There is a rule in the EU: More investment in research and development, higher GDP per person

How did Slovenian science look in 1991, what was happening with it during the period of Slovenia’s independence and what is its state today?

Dr Franci Demšar and Jasna Kontler – Salamon deliver the answers to these questions in their book, Slovenian Science: Academic Game or the Trump Card for Social Progress?, that was just published by University of Primorska Press (Založba Univerze na Primorskem) in cooperation with the InnoRenew CoE. 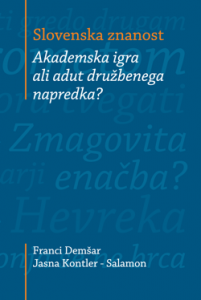 The presentation of the book will occur on Friday, March 22, 2019 at 12:00 in Koper Regional Museum (the invitation is at the bottom of the article).

The book begins with the very first instance of written Slovenian, the Freising manuscripts, and quickly goes through almost a millennium of the greatest achievements in Slovenian science. It pauses at 1991 to explore the state of science during the country’s national turning point. It then goes on to analyze what happened with science in the now independent country.

After the introductory part of the book, the reader no longer follows newer scientific achievements of individuals, groups and institutions, but learns what helps the development of science from the administrative perspective, for example the mechanisms of scientific work and financing and the role of science in the political and social framework. These factors are also considered in a European context.

That the relationship between basic and applied science is incredibly important, is indirectly emphasized by the book’s subtitle. To what degree science stays within the confines of the academe or becomes victim to itself, as well as how much it links itself to the economy and strives to utilitarianism, is probably in the hands of the decision makers or formulas that correctly take into account a number of circumstances and considerations, including  if politics and society recognize science as one of the fundamentals of a civilization.

What, then, are the moves that let science develop its potential and become an effective driver of societal progress? For starters, definitely a deep analysis, which Slovenian Science offers, that shows good practice as well as the shortcomings of existing and former systems.

The authors of the book are both well informed of the workings and development of science. Dr Franci Demšar knows the topic very well from all sides as a scientist (PhD in physics, researcher at the Jožef Stefan Institute) and co-creator of scientific policies (director of ARRS, current director of NAKVIS), as well as publicist (author of attention-grabbing books Transparency and The Public House of Slovenia). Jasna Kontler – Salamon has been judging science from a critical journalistic distance at the newspaper Delo for thirty years. The authors therefore show the position of science from multiple viewpoints from the past quarter century, which opens a nuanced look into its workings.

We asked Dr Franci Demšar, who is involved in the InnoRenew CoE, a few questions.

You changed many roles in the field of science, from a doctoral and postdoctoral student in the USA, scientist at the Jožef Stefan Institute, director of ARRS, research councilor at the Faculty of Management to the current director of NAKVIS. What do you like to remember most from this journey?

Each and every one of those periods were full of challenges. When doing research at IJS and in the USA, we had a very good research environment. Our articles were noticed in the scientific world and were cited more than 1400 times. My field of research was magnetic resonance imaging, an exceptionally interdisciplinary field – I worked with many doctors from the Ljubljana Faculty of Medicine and UKC, with chemists, biotechnologists and researchers from the field of woodworking. I learned cooperation and respecting knowledge from other fields in this period.

What is important for managing ARRS and NAKVIS, apart from learning about the Slovenian academic world, is the ability to coordinate and look for solutions that are acceptable for as many people as possible. After ten years of managing ARRS, I am very proud to have helped increase the international recognition of Slovenian science with measures of research policy.

You were in America twice for longer periods. Did the direct experience with a different educational system influence your view on science? What does the American educational system have that the Slovenian doesn’t, and vice versa?

In the USA, I noticed that their national innovational system works very well. I will never forget my coworkers leaving in the weeks after they finished their PhD and how the economy practically stole them away. This doesn’t work as well in Slovenia.

On the other hand, I can safely say that in the USA I never had the feeling that the knowledge I received in Slovenia wasn’t comparable to the knowledge of my American colleagues. On the contrary, I worked with them on an equal footing from day one.

What did you learn from looking at science from different, in a sense opposite, sides?

The workings of science have their own rules, and it is good for those that manage it to know those rules. Researchers are generally curious, persistent and ambitious. They often, however, don’t like writing project proposals and reports. They mainly don’t like explaining financial and organizational details.

Conversely, the people financing science want to distribute financial funds to the best – those with exceptional references and good project ideas. When it comes to that, both the science and relevancy is important because the mechanisms of monitoring the use of funds is crucial. Scientific administrators expect a lot of work from researchers so that the reviewers get as much information as possible.

When an excellent researcher is not successful in getting a project, two people are disappointed – the researcher, who does not understand why their excellency is not recognized, and the manager of the research agency, who is wondering what can be changed in the methodology of evaluation.

Did we gain something crucial, and possibly lose something, in the time after Slovenia’s independence?

Slovenian science has achieved great progress in scientific quality in the past 25 years, which is still growing. Internationally comparable indicators of scientific excellence put Slovenia in the upper third of the EU. In this short time, the number of articles in scientific papers that are indexed in the database WoS (Web of Science) went from only half to twice the European average. An indication of how well the article is doing are its citations, which grew from a third to 150% of the European average. A similar increase occurred with highly cited articles (top 10%).

In this time, we still have not managed to create good cooperation between science and the economy, nor a connection between the social sciences and governing our country.

The Slovenian scientific community has been expressing a dissatisfaction with the state of science a lot lately, especially when it comes to the amount of funds the country offers. What is the percentage that our country gives to science in the European context?

According to the last data from Eurostat, Slovenia gave funds for scientific research at universities and institutes at 60% of the European average. No comment needed.

Which countries have created the best environment for research and where on that scale is Slovenia?

It’s interesting that Slovenia, especially with tax relief after 2007, has invested in businesses comparatively similar to the European standard, while at the same time not creating mechanisms that would lead to better cooperation between the economical and academic spheres.

Yes, very – we are way over the European average. According to the information on extracting European funds compared to the funds we give to the EU, the total result is 150% successful.

Which improvements are, in your opinion, crucial for Slovenian science?

I mention two in the conclusion of the book. First, changing the mechanism of tax relief, which would be an important part of promoting cooperation between the economy and the academic sphere. Second, we must significantly increase the inclusion of institutional researchers into the pedagogical process. In this case, I feel like a failure, since the ministry did not allow me to realize a project of pedagogical-research cooperation, which had started very successfully, while I was managing ARRS.

We can see a common thread in your books: the concept of transparency. You introduced it in your book Transparency, included it as an important element in the workings of public administration in the book The Public House of Slovenia and in Slovenian Science you focused on the topic as its inspiration. So is the field of science more transparent than other fields? Did you incorporate any of your principles of transparency, for which you advocate, into the public agency working on the quality of higher education science, which you have been managing for over the past half a year?

Yes, it’s true. I believe that public employees who know that their actions are seen to everyone, act completely differently than if they know that their actions are hidden. Just the fact that all the articles of our researchers are available on COBISS and SICRIS, which can be viewed by their colleagues, students, patients, partners, etc., has had a big impact on Slovenian scientific production.

I would like to include information on pedagogical programs, which are available to NAKVIS, on SICRIS. I feel that this kind of transparency will help with increasing the quality of Slovenia’s higher education as well.

You are among those that create scientific policies, you were the Minister of Defense and ambassador in Russia, but you are also a scientist, working as a researcher for many years. What encourages a scientist to go into politics? Or, to put differently, what can politics offer that science cannot, and vice versa?

I believe there are two types of people. The first is the kind that wants to do as much as they can on their own, with their own head, with their own hands. Science in many ways is that kind of work. The second type finds their mission in connection, in synergy. More than what they contribute, they care about the result for which they hoped. I completely fall into that second group, since it makes me happy to see a result achieved, even if I have only made a partial contribution – I am just glad it happens! Politics can offer a similar possibility as, for example, writing books since it enables, with different mechanisms of course, for more to happen than you can do on your own.

You can find out more about the book and Slovenian science at its presentation.

A discussion with Dr Franci Demsar and Jasna Kontler – Salamon will be led by Mitja Tretjak.

You are kindly invited to join the presentation.

InnoRenew CoE hosted the Minister of Education, Science and Sport