The Slovenian National Building and Civil Engineering Institute, one of InnoRenew project partners, officially inaugurated a new Fire Laboratory in Logatec at the beginning of September. It is the largest and only facility of its kind in this part of Europe.

The new Fire Laboratory will enable further development and scientific excellence in the field of testing the fire properties of materials and structures, as well as the capacity to test the fire resistance of products from Slovenian and foreign industry. The state-of-the-art equipment was financed with cohesion funds from the InnoRenew project, while the Ministry of Education, Science and Sport contributed 2 million euros. 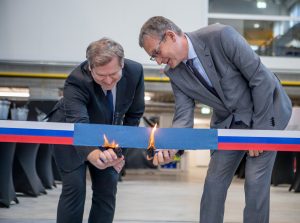 The Minister of Education, Science and Sport, Dr. Igor Papič, was the keynote speaker at the event, and together with the Director of the Institute, Dr. Aleš Žnidarič, symbolically opened the new laboratory.

The event was attended by more than 170 guests from Slovenian and foreign companies, research organisations and local and national leaders. Among them was also Dr. Andreja Kutnar, InnoRenew CoE director.

The new laboratory has two large furnaces, an associated water treatment plant and other modern equipment for testing test subjects from the micro level up to 4×8 metres.

Visit from the Estonian Academy of Arts