Dr. Andreja Kutnar joins with the President of the European Commission at a Vatican City conference on the future of the built environment

The Pontifical Academy of Sciences and Bauhaus Earth organized the “Reconstructing the future for people and planet,” conference in the Vatican as part of the Festival of the New European Bauhaus.

“It is a real honour that you put the New European Bauhaus at the centre of your conference,” President Ursula von der Leyen said.

“It shows how impactful the initiative already is: not just in finding inspiring solutions to climate change, but also in helping to improve people’s lives in the way we design and build our homes and cities.”

She added, “Generation after generation has exploited nature beyond our planet’s boundaries. We took, we polluted, we disposed. And this has to stop. We need a new model, which gives back to nature instead of taking away from it.” 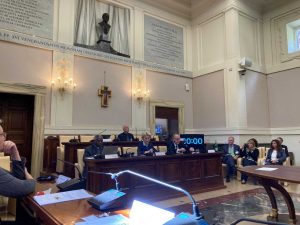 Dr. Andreja Kutnar, InnoRenew CoE director and professor at the University of Primorska, talked about building materials and the benefits they bring to sustainable construction and the sustainable development of society.

“Timber-based construction, as a method to capture and store carbon safely for decades, is finally receiving the highest level of recognition,” Dr. Kutnar, who also represented the Wood4Bauhaus Alliance at the event, said.

“Collectively we should be in no doubt that when it comes to construction a business-as-usual approach centred on concrete and steel should be replaced by the New European Bauhaus’s quest for a sustainable, beautiful and affordable future for us all. The New European Bauhaus has rightly focused on nature-based materials such as wood, leading the way to a real paradigm shift in construction, precisely because in wood we can have hope.” 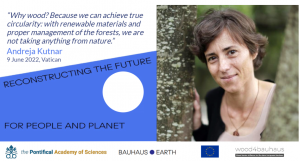 Currently, society is confronting a crisis that encompasses pressing sustainability issues, global warming, biodiversity loss and social inequality. The built environment must be added to these issues as it is an important aspect of each challenge. The construction sector accounts for approximately 40 percent of all greenhouse gas emissions. At the same time, this sector offers an opportunity and a solution by using more natural and renewable materials in the built environment to reduce this percentage significantly.

In addition to President von der Leyen and other high-level representatives, the conference featured many international experts, such as Dr. Joachim von Braun, President of the Pontifical Academy of Sciences, Cardinal Peter Turkson, Chancellor of the Pontifical Academy of Sciences, and Prof. Dr. Hans Joachim Schellnhuber, founder of the Potsdam Institute for Climate Impact Researche, co-founder of Bauhaus Earth and Ambassador of the New European Bauhaus high-level roundtable.

InnoRenew CoE researchers at the FRISSBE project kick off event

New scientific article from InnoRenew CoE together with researchers from Nagoya University, Oregon State University and University of Georgia