Voting is closed, but the exhibition will still be available on the website

Results of the voting brought a convincing “winner” – the image “A microscopic image of pine sapwood roughness” received as many as 56 out of 197 votes, i.e. a good quarter. This image was made during research of a bio-based coating system with living organisms for wood protection. Researchers were testing optimal surface roughness for such a system. 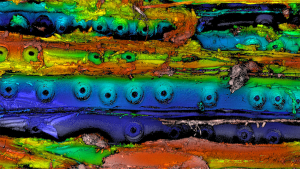 It’s a bit surprising that the picture is signed by three researchers, Faksawat Poohphajai, Anna Sandak and Jakub Sandak. Ana Sandak, co-author of the picture and leader of the Wood Modification research group, which performed the research, explained that: “All three were behind the microscope, and it’s hard to say who pressed the button for this shot. It was just an exploratory analysis; we were verifying optimal measurement set-up and saved a few photos from this first trial.”

This picture led the voting from the beginning, where it stayed the entire time, while second and third place were tied all the way to the end – Václav Sebera’s “Beech wood cell wall, from which micropillars were cut using an ion beam (scanning electron microscope)” and Laetitia Marrot‘s “Carbonized oak wood” received the same number of votes, 28 each. It should be noted that Laetitia Marrot’s image was the trigger for the exhibition’s idea, which you can read about in the article The Frames of Science exhibition – a look behind the scenes.

We would like to take this opportunity to warmly thank all the researchers for their cooperation. Finally, let us add that the image that received the most votes will be on the cover of the next InnoRenew CoE annual report. 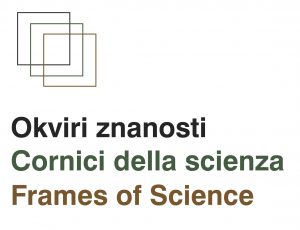