The Society of Wood Science and Technology (SWST) annual convention kicked off on Sunday, 12 July 2020. InnoRenew CoE and University of Primorska were in charge of organizing this event, the 63rd in a line of meaningful conferences for wood scientists. The date had been set and plans made well in advance. We wanted to make the event special, and we knew bringing together our friends and colleagues in Portorož, Slovenia would be special.

Then came COVID-19. With the pandemic looming large, it would have been irresponsible and, in many cases, impossible for people to travel to Slovenia for an in-person meeting. We had two options, cancel or host an online meeting. We opted for an online meeting and then raced to figure out how to make this work well.

The SWST Executive Board quickly approved the idea, and we began planning the event all over again. This meant many changes for our team as well as changes for the conference presenters. Rather than physically standing in front of their peers and presenting their work for 10-15 minutes, we now requested 3- to 5-minute videos and would have no live presentations. This plan seemed effective for sharing science on a tight schedule, but we knew we were still going to miss many of the benefits of an in-person meeting: the easy back-and-forth during live question and answer periods, discussions over coffee, making new friends at dinner, getting to know old friends better over drinks and building the SWST community. We were also going to miss showing off our beautiful country to the attendees.

Technical challenges aside (and making the event run smoothly was a technical challenge), we decided to try a few things to continue build community, give attendees a chance to talk and make the event feel alive. To the SWST Executive Board’s credit, the event was free. Anyone could attend, watch the presentations and participate in the discussion. We also launched an SWST Slack workspace to help keep the conversation going after the conference.

The online format gave us some space to try new things as well. At the opening reception, we had the chance to get to know some of the members a bit better through video introductions. We even had musical performances by SWST members, recorded separately and across continents, that were combined into music videos. The crowd seemed to love these, and we continued to show them during breaks throughout the conference. We also used the breaks to show a few promotional videos from sponsors and some videos showing Slovenia’s natural beauty. 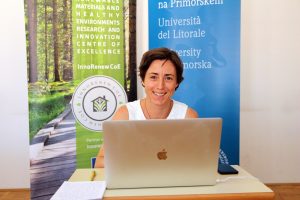 Dr Andreja Kutnar at the opening reception. Image: UP

In the end, presenters did a great job converting their presentations to shorter formats and making either videos or slide shows with voice overs to share their work. We managed to squeeze some questions into each session, allowing a few presenters to step onto the virtual stage and respond to their peers.

Session chairs had an unusual task as well. Unlike an in-person conference, session chairs had to identify only a few questions of the many that came in during the session so that speakers could be identified, asked if they were willing and able to answer live, then be given the appropriate permissions to do so. The chat window was quite lively through most of the presentations with introductions, discussions and compliments to presenters.

Each year at the annual convention, SWST has a business meeting where its membership is updated on the status of accounts, awards are given and other announcements are made. We also usually vote on at least one issue, which was quite easy with the polling feature in the conference tool we used.

One of the biggest challenges we faced was the poster session. Usually there is a reception (with drinks!) during the poster session to encourage people to talk to the presenters at the posters and give everyone time to see what is on display. This year, the posters were uploaded and could be viewed on-demand. We didn’t achieve quite the same feel, but the poster competition still went forward and three students earned cash prizes for their work.

Behind the scenes, InnoRenew CoE’s lead IT specialist came up with a good method to make the conference run smoothly. It still took a team to operate the event and only transitions between videos were automated. There was quite a bit of interaction in our conference headquarters, too. While the conference was live, we had at least five computers and nine screens active, with the occasional extra laptop open. It felt a little like one of those scenes in spy movies with screens everywhere and a bunch of people with headsets making hand gestures and talking to one another. We only ran into a few small glitches and managed to recover from those rather quickly. 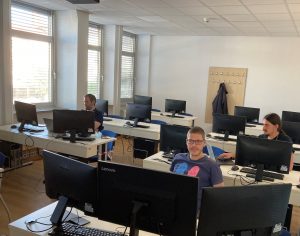 The IT room. Image: InnoRenew CoE

In the end, we didn’t get to meet with our distant friends and colleagues over coffee on Slovenia’s coast, but I think the conference went well. We made an impact by hosting a successful event and will get to hold the in-person conference in Slovenia in 2024. I am most proud of the feedback we received from students and colleagues that would not have been able to attend the conference in person but were able to join because it was online and free. So, while we may have missed seeing our friends, we made a bigger and more inclusive impact.

A lot of reading