What would a tree morph into, if it had a choice? This Kafka-like question cannot be answered, of course, but it still makes sense to try. Imagine all the products made of wood and then try to discover which of them a tree would prefer to be, assuming its altruism. One of the products made primarily of wood that has both longterm and immediate value and meaning for human life is a musical instrument. When wood morphs in a musical instrument, pleasure to given to people through artistic performance for which the wood has provided a means – its material. Wood helps to resonate sound, and it also gives aesthetic shape to the instrument. Therefore, the final artistic charm is a synchronization of visual and acoustic experience.

The development and innovation of musical instruments spans millennia and will likely never stop (unless people give up on music), and we (InnoRenew CoE researchers) would also like to contribute. My fellow researchers, Dr Andreja Kutnar, Dr Michael Mrissa, MSc Marica Mikuljan, Dr Rok Prislan, and I have a very specific contribution in mind. We will try to answer whether cheap and commonly available poplar wood can be used in musical instruments such as the electric guitar. Because native poplar wood has physical limitations and is not convenient for such applications, we decided to use and test densified poplar wood in the guitar neck. 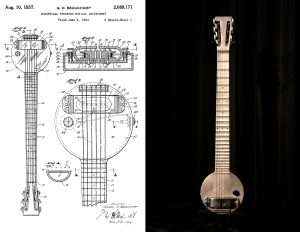 Diagrams of one of the first electric guitars (Rickenbacker A-22) and the instrument itself, known as “frying pan”. Photo: Museum of Making Music at English Wikipedia / Wikimedia Commons

The electric guitar is a relatively a new musical instrument that emerged between the World Wars. Its development was mostly enabled by progress in electronics; however, it still preserves certain aspects of its ancestor – the classical guitar. Despite the electric guitar’s young age, it contributed to music of 20th century more than any other instrument of this period. We may dare to say that the electric guitar is one of the most significant (or the loudest?) instruments of the 20th century. Can you imagine the 20th century without the Beatles, B.B. King, Jimi Hendrix, the Rolling Stones, Neil Young, Metallica, Nirvana and the hundreds of others who used it? 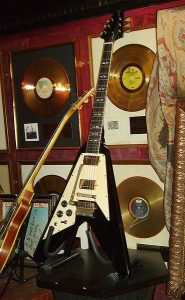 But back to the guitar and densified wood. The neck of an electric guitar differs in a shape and material depending on its producer and country of origin; however, it is often made of maple, ash or other hardwoods since it does not require the acoustic properties needed in classical guitars and violins made of softwoods. Therefore, we are now exploring if densified poplar wood (DPW) can replace commonly used hardwood species or those imported from overseas such as rosewood and mahogany. Our general research questions are as follows:

Our research questions try to aim at the project’s general idea – what is the advantage of using DPW over currently used species? We don’t know the answers yet, but we can follow certain clues. First of all, DPW may be good a choice because it enables utilization of abundant poplar wood for producing a product of high quality. Further, DPW may have the advantage of substantially increased density and slightly increased elastic parameters that will result in changed natural frequencies and lower deflection when pulling strings. For the ultimate answers, we still have to wait a bit. However, to seek answers to these questions, we will use sophisticated complimentary approaches: experimental and numerical analyses.

We believe that utilizing densified poplar wood made from local sources for musical instruments may open new paths for other applications of this material in this field. When our research questions are answered,  it will then be crucial to ask musicians themselves about their opinion and feelings when playing an electric guitar made of different materials.