Bioinspiration is a relatively new scientific approach but, at the same time, probably as old as humanity itself – as much as the idea on which it is based: to look at nature in order to find solutions for many problems. Human beings have always been inspired and fascinated by the colours, shape and functions of living organisms. Over the billions of years of evolution, remarkable biodiversity has developed. Today, there are approximately 1.8 million species of living organisms on earth that have been scientifically documented, out of an estimated total of around 10 million.

Many biological mechanisms are still not understood, but they can stimulate the invention of a new process or material anyway. The invention of the aircraft was inspired by bird flight, but planes use a different process to fly than birds. Biology was just stimulation for a new idea. Among more evident, well-known examples of biological mechanisms in recent history are seeds of rapeseed as inspiration for velcro straps, self-cleaning coatings with lotus leaf effect, anti-fouling coating inspired by shark skin, front of shinkansen train inspired by kingfisher beak, shock absorbing materials inspired by woodpeckers and buildings with efficient ventilation system inspired by termites’ mounds. Today, there are many extraordinary examples – from façade systems that cultivate micro-algae to harvest energy for heating and cooling of the building, described in the book Bio-based Building Skin, to bacteria that enable self-repairing roads. A collection of successful examples, as well as ideas that haven’t been realized yet, is available on the platform AskNature, which is dedicated to bioinspiration and biomimicry topics. 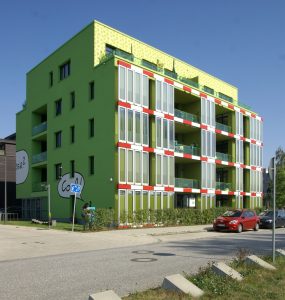 Building with façade system that cultivates micro-algae to harvest energy for heating and cooling of the building (Hamburg, Germany). Photo: Marcin Brzezicki

Although man has probably been using bioinspiration since forever, in the early 1990s, there was a noticeable shift in view of this principle and a gradual expansion of bioinspiration research and its popularization. Since many features that exist in nature are on the nanoscale, an important trigger in this process was the progress of nanoscience and nanotechnology as well as development of high-performance analytical techniques such as scanning tunneling microscopy (STM) and atomic force microscopy (AFM). Last but not least, the interdisciplinary approach promoted in research and development also prompted bioinspiration development. Close collaboration between scientists in various fields, such as materials scientists, engineers, biologists, chemists, physicists, designers, architects, mathematicians and even big data scientists, is very important for the successful implementation of bioinspired solutions.

Today’s actuality of bioinspiration as defined by G. Swiegers (Bioinspiration and Biomimicry in Chemistry: Reverse-Engineering Nature), “understanding the fundamental aspects of some biological activity and then recasting it in another form,” might also be seen in a considerable number of similar or synonymous terms used in recent years; for example, biomimetic, also called biomimicry, derived from the Greek word biomimesis (bios for “life” and mimeticos for “imitation”, “representation”) and meaning “mimicking biology, living nature, or living organisms” (B. Bhushan, Biomimetics Bioinspired Hierarchical-Structured Surfaces for Green Science and Technology), which, according to the Merriam-Webster online dictionary, was used in a scientific sense for the first time in 1970. Compared to bioinspiration, which draws ideas from nature more indirectly, biomimetic is more direct and precise in replication of biological function, processes and materials. In addition to bioinspiration, biomimicry and biomimetics, terms such as bionic, bio-imitation and nature-inspired design are often used alternatives.

Bioinspired solutions are successfully implemented in many fields – in material science, robotics, sensors, medicine, architecture, structural engineering and data science among others – and the most prominent research teams involved are in Switzerland, Germany, Italy, the United Kingdom, the United States, Japan and China. Dr. Anna Sandak, research group leader for Wood Modification at the InnoRenew CoE, is among those scientists dedicated to the topic of bioinspired solutions. Dr. Sandak has long been interested in the field of bioinspired materials, especially in connection with wood technology as she graduated in both fields: biology and wood science. Real progress in bioinspired materials requires knowledge of both biological and engineering principles, disciplines that traditionally do not overlap.

In the Wood Modification group, biomimicry and bioinspiration are implemented using both bottom-up and top-down approaches. In a bottom-up approach, analysis of morphology, anatomy, biomechanics or physiology allows understanding of biological structures, their shape and functions. This knowledge can be then implemented to design a new process or material. The top-down approach is driven by existing engineered problems and is related to improvement of existing products – inspired by solutions developed in nature, of course.

“Bioinspiration is currently very popular,” says Dr. Sandak. “But in the wood modification field, it is still in its infancy. And here, I see an additional advantage — not only that we follow natural mechanisms for finding solutions, but we also use bio-based, rather than synthetic, materials for their implementation.”

Each of the six researchers in the Wood Modification group has a different scientific background; therefore, they often brainstorm about new research directions and ideas for problem solving. Recently, they started to investigate self-reparation mechanisms of biofilm, based on the fungus Aureobasidium pullulans, which protects wood. The biofinish is designed to protect outdoor wood from environmental conditions by its ability to self-regenerate. The topic is included in the PhD research of Faksawat Poohphajai, InnoRenew CoE researcher, but it is very complex, and there is still a lot of research to be done. 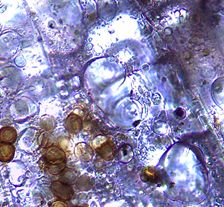 Dr. René Herrera Díaz is investigating bio-based extractives for wood protection within his post-doc research at the InnoRenew CoE. In the life processes of a tree, many small, non-structural compounds are present with the function of providing protection against environmental factors. Nature designed trees to be wet and equipped them with quite an efficient protection system. Wood as an engineering material used for several applications has lower moisture content, and the protection designed by nature does not provide full defence. Although wood extractives represent a minor fraction in comparison with the cell wall components, they are an important source of molecules with bioactivity suitable for wood preservation. 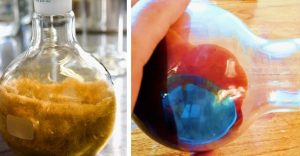 Dr. Sandak is aware of great research performed by teams from all around the world. According to her, InnoRenew CoE is one of the few research institutes applying biomimicry and bioinspiration to wood modification, protection and functionalization.

“I believe that bioinspiration might also be an interesting trigger to reinforce collaboration with other research groups,” says Dr. Sandak. “Development of new materials can be supported by bio-inspired computing and can serve for development of sustainable buildings. Use of bioinspiration is so natural and obvious, many of us do not even realize that several of our ideas and solutions are nature-driven. I totally agree with Einstein’s statement: ‘Look deep into nature, and then you will understand everything better.’”

It’s the information that is valuable