Barbara Rovere at LOOK AROUND 360

LOOK AROUND 360, the first Slovene conference about virtual and augmented reality (VR/AR) technologies, and opening of the VR/AR Lab took place on 21 March 2019 at the Technology Park in Ljubljana.

The importance of VR/AR for companies is increasing; therefore, it is crucial that Slovenian companies also enter this world. LOOK AROUND 360 brought together several Slovenian VR/AR experts who participated in various panels, workshops and one round table.

Barbara Rovere, assistant researcher and project manager at the InnoRenew CoE, took part in the panel titled “Open Innovation in 360 Ecosystems”. She presented the concepts of innovation, open innovation and  the impact of VR/AR technologies on practices and results of open innovation. Moreover, the panel addressed new challenges this technology is bringing as it represents the next step in digitalization of business operations. 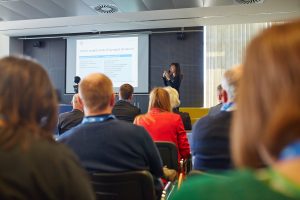 In colourful discussions, important issues about the future and challenges of open innovation and the use of VR/AR technologies in Slovenia and beyond were discussed. Numerous projects, examples of good practices, possibilities of cooperation and obtaining support for companies that are active in this field were presented.

The conference also hosted the opening of the VR/AR Lab, which is a meeting point for Slovenian VR/AR technology and includes key players from faculties, research organizations, companies and individual enthusiasts who work in the development of this technology. At the event, participants, together with experts, students and start-ups acquainted with the latest technologies, had the possibility to test and develop ideas in the VR/AR field.