Developments in the Servite monastery in Koper

The Servite Monastery, most known primarily as the city’s maternity hospital, is currently undergoing gradual renovation and reconstruction under the direction of the University of Primorska and the InnoRenew CoE. Tim Mavrič, assistant research at InnoRenew CoE and a PhD student in Cultural Resources and Archives Management at the UP Faculty of Humanities, and Eva Prelovšek Niemelä, InnoRenew CoE’s architect and one of the leaders of the renovation, have summarized the latest interesting developments.

After the restoration of the roof of the Servite Monastery was successfully completed this winter, new activities are now underway to ensure the long-term restoration of this heritage-listed building. In order to successfully obtain funding through national and international tenders, InnoRenew CoE completed the preparation of a detailed conceptual design for the renovation and reconstruction of the monastery. The project will form the basis for obtaining the design conditions necessary for the building permit. 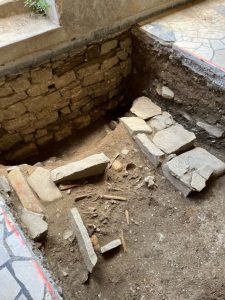 Systematic archeological excavations began in early August, carried out by archeologists from the Center for Preventive Archeology, a special unit of the Institute for the Protection of Cultural Heritage. The results of the excavations will shed light on the extent to which it is permissible and possible to disturb the soil beneath the monastery. At the same time, they could bring to light interesting new details about the history of the complex, especially more information about the alleged luxurious Roman villa from the 1st AD, which was probably located on this site. In consultation with the Office for the Protection of Monuments, about 25 sites have been identified for archeological soundings – limited excavations of square or rectangular shapes with dimensions ranging from about 2×2 meters to 2×4 meters. To date, archeologists have excavated 8 soundings, which are currently undergoing an accelerated investigation. Two of the soundings have also been completed as the archeologists have excavated down to the geological bedrock – i.e. the deepest overburden that no longer shows signs of human activity. The archeological soundings so far have brought to light various small findings, but several masonry structures and walls have also been found, reaching particularly deep along the western outer edge of the monastery. There were also many graves in which archeologists identified individual burials of adults and children. With the exception of a few fragments in individual layers, all finds were identified as medieval and modern. This shows the varied history of burials in the area around the former church of St. Martin, around which the medieval monastery first developed, and then from the various building phases of the monastery wings from the end of the Middle Ages to modern times. The archeologists will work throughout September, advancing from one part of the building to another. Only the analysis of the excavated material after the completion of the excavations will be able to provide more accurate information about the history of the building. 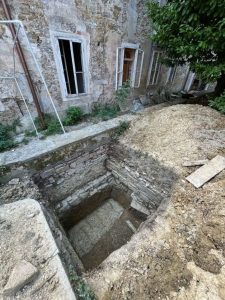 The archeological excavations will also allow an analysis of the existing sewer and water supply network in the building, which will be important information for the design of the new water and sewer installations and for the final solution of the stormwater drainage. When designing the new pipelines, the routes of the old pipelines must be maintained as much as possible to minimize damage to the preserved archeological layers. The issue of stormwater drainage also raises the question of the condition and preservation of the water cistern still located in the south courtyard of the complex with the cloister. A survey of the extent and state of preservation of the cistern (camera descent into the cistern, 3D scanning) will be conducted soon to determine if the cistern can be reused as a water storage facility as part of a new stormwater drainage system in the building.

The archeological excavations also overlap with the soundings of the floors and walls, which are carried out to make a structural assessment of the entire building. Because the building has rather succumbed to the ravages of time after 20 years of neglect, a comprehensive assessment of the strength and load-bearing capacity of all structures is required before detailed conceptual plans for these structures can be prepared. The structural assessment of the building will be carried out by experts led by engineer Iztok Leskovar, who will separately evaluate the vertical structures made of brick and stone masonry, as well as the horizontal structures between the floors, which are mostly made of wooden beams and formwork.

In addition to the archeological excavations, demolition work is also underway to remove disruptive suspended ceilings and thin partitions from the postwar period that will interfere with the new organization of the building. The post-war annex, which housed the heating system, has also already been removed, while at the same time the roof is being renovated.

Demolition work, now taking place primarily in areas identified as the remains of the original monastic church of St. Martin, has uncovered an older brick wall in which conservators have discovered two brick slender openings typical of the Gothic architectural style. This new discovery in an unexpected location within the former monastery church has yet to be historically and architecturally identified and evaluated and has been included as a special element in the concept for the space that will house the museum that will take the place of the Servite Monastery after renovation. In the course of the ongoing research, there may be other interesting discoveries in the floor or walls of the monastery.

Halfway through OLEAF4VALUE: from the valorisation of olive leaves to the exploitation of high value-added biobased products