It’s the information that is valuable

Over the last ten years, smart devices have become an integral part of everyday life. The most common of all is certainly the smartphone. These interactive and autonomous electronic devices, which are connected to other devices through the internet, were already envisioned by the scientific community in the 1950s.

However, the real breakthrough that enabled smart devices as we know them today was in the early 1980s. The ARPANET information network, developed by the Advanced Research Projects Agency (ARPA), an agency of the United States Department of Defense, has enabled the proliferation of interconnected networks worldwide by implementation and standardization of the TCP/IP protocol. The Transmission Control Protocol (TCP) and the Internet Protocol (IP), also known as the Internet Protocol Suite, are in fact a multitude of protocols or procedures that provide connection for information networks and, thus, the functioning of the internet.

TCP/IP, the innovation of computer pioneer Vinton Cerf, was first tested in 1977 and is still a standard protocol for today’s internet. Development of the protocol has progressed steadily with many improvements. Some of the more notable achievements happened in the area of ​​media bandwidth, such as optical networks and 5G wireless, with Slovenia having above average internet speed in the European Union in terms of network accessibility and average bandwidth.

Aleksandar Tošić, an assistant at University of Primorska Faculty of Mathematics, Natural Sciences and Information Technologies (UP FAMNIT) and a research assistant at InnoRenew CoE, has an interest in the Internet of Things (IoT), which, along with similar topics, led him and his colleagues Mike Burnard and Jernej Vičič to construct a smart floor prototype. Tošić defines smart devices as only devices that measure, compute and communicate as well as automatize specific tasks on the basis of software or hardware.

“They are designated as ‘smart’ because they are able to make autonomous decisions on the basis of data, usually obtained by sensors that can work by simple cause and effect logic as well as serious artificial intelligence, and perform actions using actuators. But an even more relevant reason for naming them ‘smart’ is marketing,” Tošić believes.

The hypernym for smart devices could be IoT, which is a group of computer systems consisting of computing units, actuators and sensors that are uniquely identified and connected to a network where data flows are uninterrupted and without the need for human intervention.

Such state-of-the-art technology offers tremendous potential for smart devices, but they have not been fully exploited since there are many obstacles to their use related to security, privacy, autonomous services monetization, surveillance, confidence in artificial intelligence and the like. So exceptional practices, like a refrigerator that analyses our needs, detects when a particular item runs out of stock and automatically orders it from the store, from where it would be delivered to us in Slovenia as well as in many other countries, are not yet in use.

Nevertheless, smart devices as well as smart environments are increasingly evolving. The smart environment is the field where Tošić’s smart floor prototype belongs. The idea was born out of two discussions. The first, according to Tošić, was launched at a computer science seminar at UP FAMNIT where the speaker presented existing solutions, needs and problems for geolocating indoor users. The other, which is just indirectly related to the prototype, revolved around the question of how to protect the privacy of vast amounts of personal data in the future, while allowing services to access the data they need to operate. 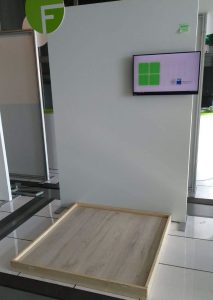 Smart floor prototype, exhibited at Future Living event organized by the Chamber of Commerce and Industry of Slovenia. The prototype was available for more than one month for visitors to try; meanwhile, researchers were testing the reliability and precision of the measurement. Photo: Aleksandar Tošić

Tošić’s smart floor prototype (presented at the 22nd International Multiconference Information Society and in the paper, Privacy preserving indoor location and fall detection system, published in the conference proceedings) is a modular inserted piece with sensors. Its puzzle-like form enables coverage of a major area without knowledge of electronics as individual pieces of the puzzle make contact with each other. Built-in resistors (sensors) detect reduced resistance when the piece is pressed and so-called infinite resistance if no pressure is exerted. If we perform calibration, we can estimate the force applied to the floor.

Resistors are placed in the intermediate layer between the insulating subfloor material (styrodur, laminate underlayment, sponge, etc.) and laminate/parquet flooring. They are placed in a matrix of squares (40 x 40 cm) and connected to a controller that measures the difference in resistance, converts the analogue signal to digital and sends the data to a computer with software that can interpret the measurements. 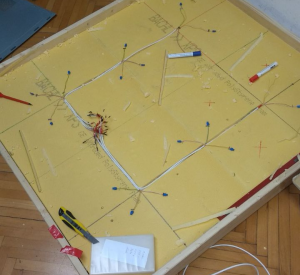 Tošić explains that if we can define the force by which we put pressure on the floor, at least approximately, we can also follow the patterns of behaviour formed by people walking, places where people linger in space and how people utilize different places. The usefulness of such readings is very high and seems particularly welcome for users living alone and/or subjected to health complications or injury risks. Namely, by using artificial intelligence, the smart floor detects falls or other marked deviations from patterns, and the system automatically informs user’s relatives or caretakers about these.

There are also some unresolved challenges; for example, placing a heavy object in a space might be misidentified as a fall. The system must bypass this information in order to avoid false positives. Researchers will focus on this in further research. “We are also planning to set up a test office with smart floor,” says Tošić. “This is expected to be one of the offices at InnoRenew CoE and will enable the collection of data for the development of algorithms as well as artificial intelligence for fall detection, walking, activity of office users and the like.”

The test office set-up and results that it will bring will indicate possibilities for simplifying and cheapening the prototype to make the smart floor interesting for wider use. Researchers are particularly striving to make the innovation accessible to nursing homes and, especially, in bathrooms where falls are statistically more common.

Tošić believes that today’s technology, which enables older people and people who cannot live on their own to live more independently, has achieved remarkable development but faces a gap between the complexity of active solutions (solutions that require user action) and the ability of users to take advantage of these solutions. Therefore, passive solutions – solutions whose presence we are not even aware of until we need them – seem to be more useful. One of the widespread examples of active detection of indoor users is the smart bracelet, which users have to charge, put on every morning, etc. However, operation of a passive system, such as a smart floor, does not require any user activity.

Another ​​great challenge, not only for the smart floor but IoT as a whole, is the issue of personal data security and privacy. In the past, science has devoted a great deal of attention to this issue, especially in the fields of cryptography and databases, and, in recent years, in the new field of decentralized systems such as blockchain technology and similar DLT (distributed ledger technologies).

Solutions in this area are also a part of the smart floor project. The challenge is to protect personal information (location, use of premises) while still enabling the data processing needed for the system to function. The basic idea is to store the data in such a way that at any given time users are in control of their personal data, while at the same time enabling the computation and use of the data to the software. One way privacy preserving computation can be achieved is to enable only the program to access the private data (input); meanwhile, the output of the program (result) is public and not the data on the basis of which the program reached that output.

“The need for privacy preserving computation stems from the fact most smart devices are, in part, spyware,” says Tošić. “We use them carelessly as we usually think we have nothing to hide. But with aggregating data from a multitude of users, algorithms can be used to group, observe and predict behavioural patterns of individual groups. For a long time we have been listening that we are living in an Information Age but not being completely sure why. Today, it is more clear than ever: it’s the information that is valuable.”

We need to do much more

Challenges of the European Green Deal

SWST International Convention to be held online for the first time