First results of smart textiles research appeared in the public in the early 1990s. Their development has been encouraged by the military sector. Among pioneer work in the field is the “Georgia Tech Wearable Motherboard”, the smart shirt designed by S. Jayaraman and his colleagues at Georgia Tech. The sensors-interlaced garment is intended not only to detect changes in soldiers’ health status in real time (such as possible wounds during combat) but also to collect and analyse their health information. MIT, with artist and technologist Maggie Orth at the head, is also known for pioneering research in this area, combining textiles with conductive materials, colour-changing substances and electronics.

Of course, innovations in textiles were also of interest to fashion and the fashion industry. Philips Design, for instance, has, in a line of wearable electronics called New Nomads, offered electronics-interlaced clothing since 2000; meanwhile, Sabine Seymour, a designer, entrepreneur and researcher, published her first work on the subject, Fashionable Technology, in 2008 after launching the term “fashionable technology” in 2000. However, due to problems with durability, maintenance and comfort as well as high costs, there has been no real expansion of useful or commercial smart textiles so far.

In 2011, the European Committee for Standardization published its definition of smart textiles (Textiles and textile products – Smart textiles – Definitions, categorisation, applications and standardization needs). At the very beginning, they point out that the notions of “smart” or “intelligent” textiles are quite different, with the adjectives “smart” and “intelligent” being used primarily for marketing purposes. But the technically more correctly defined material would not prevent these terms from being used, as they remark, so they themselves decided to use it as well. Although they find the standardization of smart textiles not to be straightforward because it involves an overlap between the standardization of the “traditional” textile product, they still offer a basic definition: smart textile is “functional textile material, which interacts actively with its environment, i. e., it responds or adapts to changes in the environment”.

Smart textiles could be roughly divided into two groups, active and passive smart textiles. The first group is represented by a combination of textiles with sensors and actuators in order to connect internal parameters to the transmitted message. In this case, the sensors and actuators that are embedded in textiles are able to detect different signals from the environment, such as was also the case with the smart shirts already mentioned. The base of the second group is the very properties of the textiles – the smart textiles have, in this case, the ability to change their properties according to an environmental stimulation that can sometimes work on a biomimicry principle. Highly hypothetically we could illustrate this by a textile that stretches a lot due to moisture, and this property could be used, for example, to create a roof in case of rain. 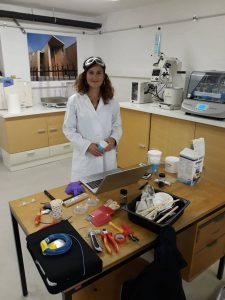 In this second group could also be placed the actual research by Dr Laetitia Marrot, researcher at InnoRenew CoE, who is, among other things, dedicated to research in this area since she is working on the changes of the textile’s conductivity with respect to the load or stress that is an environmental factor. She started to devote time to this topic in the frame of COST Action CONTEXT that seeks to connect professionals from different fields and environments to improve the usability, functionality, durability and comfort of smart textiles. Of course, smart textiles are not predicted only for clothing, although some results in this area are extremely promising – like a triboelectric fabric, for instance, that converts sources from the environment, such as wind, sun and movement, into electricity, making it possible for a person to become his own producer of electric energy – but also for vehicles, living spaces or buildings and even for absorbing pollution, such as was recently developed at the French National Scientific Research Center (CNRS) in Lyon.

The important element that Dr Marrot’s research is built on is conductivity of the material. While she is working on developing conductive textiles with renewable resources, she uses a natural-fibres textile (flax) that is non-conductive in combination with a conductive material. For this purpose, she experiments in the moment with carbon graphite, recognized for its conductive properties, with which she coats the fabrics. In the future, she will replace the carbon graphite with biocarbon produced from carbonized biomass. A material is conductive if electric charges can freely circulate within the material and allow passage of an electrical current. Carbon particles distributed in the coating create conductive paths. The closer the particles, the shorter the paths for electron transfer and the higher resulting conductivity is what is also the basis of the main idea of ​​her research. By measuring conductivity, deviations made in such a textile composite can be noticed – if it is stretched, its conductivity changes. 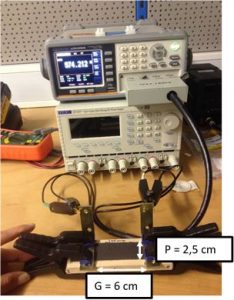 The usefulness of such a textile composite, combined with proper monitoring, Dr Marrot would like to develop in two areas. The first is related to built objects (buildings, bridges); the material would already be incorporated into the construction and changes, such as cracks caused by an earthquake or any other circumstances that could be harmful to the building, would be reflected in the textile composite. The monitored changes of conductivity would be able to detect initiation of cracks in the structure and prevent damages and injuries by alerting the users.

The other possibility is to develop an interactive pressure-sensitive textile flooring for active ageing and safety of older adults; therefor, such a textile flooring would have a dual purpose. It would stimulate the physical activity of the elderly by being able to react on the pressure of the user’s walking and could be used as an individual or collaborative game-based rehabilitation tool. For example, the textile flooring could be linked with a sound device that could play music with the same rhythm as the steps of the walker. The other important function of such flooring would be safety application – it would detect if the user has fallen and could not stand up or has been injured. In this case, the textile flooring would immediately send an alarm signal to caregivers (i.e., nurses, family members). It’s this direction of further research that Dr Marrot is going to devote in the near future, and the first step will be the next research visit in Prague in the frame of an STSM funded by the COST Action Sheld-on.

The potential utility of smart textiles is, therefore, extremely broad and promising, and it seems particularly valuable in areas such as rescue appliances (i.e., for firefighter clothing), health care and in the so-called Ambient Assisted Living (AAL) supportive environment, which enables people, who need help of others, to be more independent.